Information about ‘Dickinson’: Inside Emily and Lavinia’s ‘Bill & Ted’ Inspired Trip Through Time 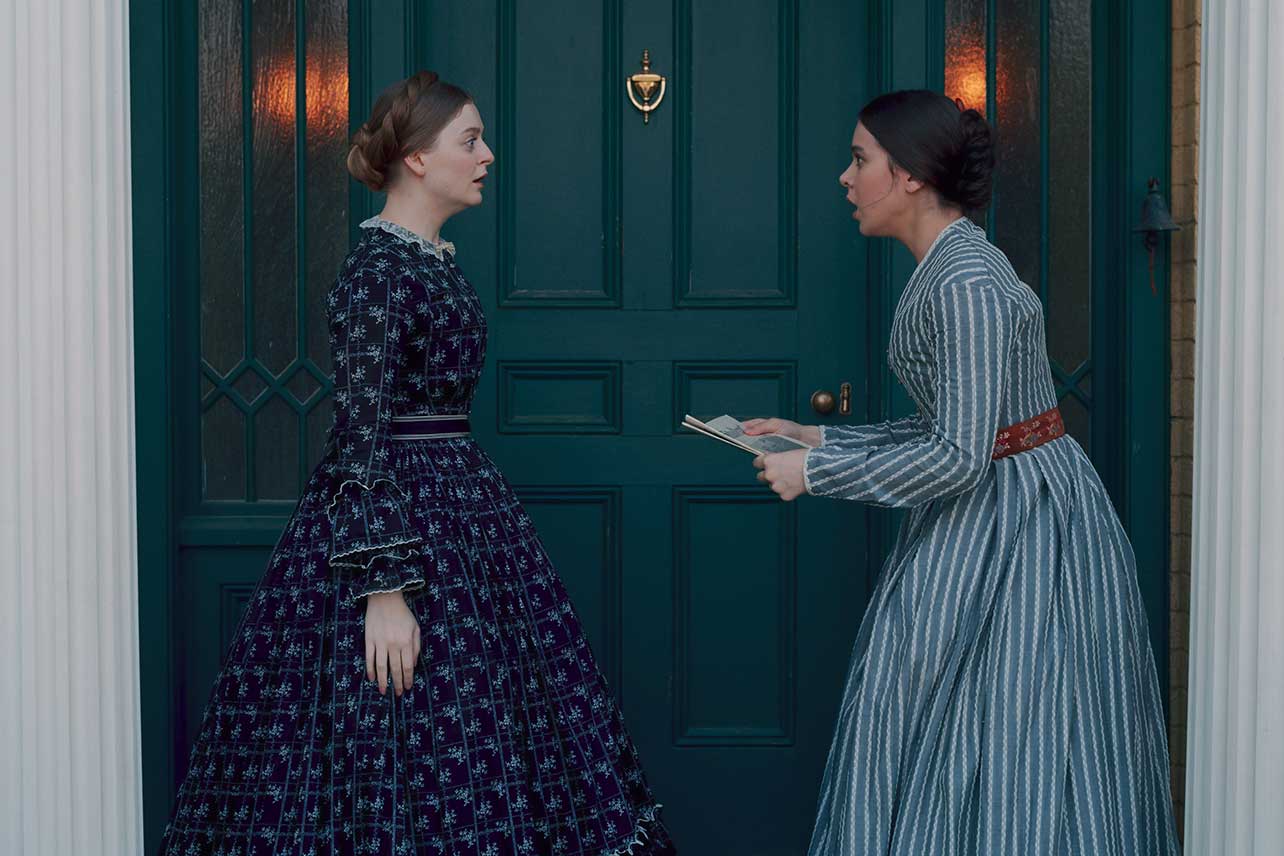 Apple TV+’s Dickinson is all about Emily Dickinson’s (Hailee Steinfeld) legacy as a poet, so it’s only fitting that she would come face to face her own impact in one of the series’ final episodes. And that all comes about thanks to a wild, Bill & Ted inspired trip through time to the 1950s, and a meeting with Sylvia Plath (Chloe Fineman).

“It was very cool to have time-traveled into this era where we are standing in front of a woman in pants,” Steinfeld told Decider, “Sylvia Plath played by Chloe Fineman, who is so amazing and I totally love her.”

In the episode, titled “The Future never spoke”, Emily is reeling after a fight with her lover Sue (Ella Hunt), who wants to be with her full time once Sue’s husband — also Emily’s brother — Austin (Adrian Blake Enscoe) heads off to the Civil War. Emily is scared of the idea: scared of what it would be to be openly and brazenly living with Sue; scared of having to raise a baby with her; but perhaps most of all, scared of whether it means she would need to give up the time devoted to her art, and instead give it to Sue.

Meanwhile, Emily’s sister Lavinia (Anna Baryshnikov) is distraught because every man she’s ever loved has died in the Civil War, and is worried she’ll be a lonely spinster her whole life. Spoiler: in real life, that’s exactly what happened to Lavinia, who never married, but eventually became the caretaker of her sister’s poetry.

“To have a car on this set, or to see [Fineman] was wearing a pair of pants, and both Hailey and I were both like ‘what is that?’” Baryshnikov recalled during a visit to the show’s Long Island set this past Summer. “She was moving around in a way that we couldn’t even imagine doing.”

Pants aside, revamping the usually 1860s based set of Dickinson to fit in with the 1950s took a fair amount of work on the part of the production staff, including adding a gazebo to the set of Homestead, the Dickinson family house. As production designer Neil Patel noted with a laugh, the reference point provided by showrunner Alena Smith was Bill & Ted’s Excellent Adventure, the seminal time-traveling comedy that found the duo traveling in a phone booth. Instead, here, Lavinia and Emily travel in a spinning gazebo struck by pink lightning. And funnily enough, Old Bethpage, the historical preservation Dickinson shot exteriors on, liked the gazebo so much they kept it to use for wedding events.

But perhaps more important was the revamped, 1950s version of Homestead, which was at that time maintained by Amherst College. The real Emily Dickinson Museum (which the Dickinson staff has worked heavily with to maintain accuracy for the series) is in Amherst, Massachusetts — and was not even created until 2003 — so essentially Patel and crew had to start from scratch.

“At that time, Emily Dickinson was not well known and the house was not the museum as it is now,” Patel said. “So she enters into that space and sees it decayed over time… We built a version of the home that was how we would imagined it being in 1955, and we had to do some exterior work.”

Once Emily and Lavinia arrive, they come face to face with Plath, who thinks they’re in costume for Smith College’s annual Mountain Day. Initially, the Dickinson sisters are thrilled to find out that women can go to college, and are generally freer than they were in 1862. And then things get even better when Emily sees her own bedroom — furniture mostly in the wrong place, but with a collection of her poems resting on the mantle.

“[The] whole episode is one of my favorites because of the fact that we get to see into Emily Dickinson’s legacy,” Steinfeld noted. “Where in Season 2, she was losing sleep over the idea of fame and publishing her work and being a known writer, to get this slight bit of insight as to what that would look like for her in the future… It was very cool.”

Added Steinfeld about the part of the sequence when Emily sees her collections displayed, “that moment, specifically, I was so excited when I read that in the script that we were touching on that part of her life.”

Despite their initial positivity, Plath has some ideas about Emily’s history that do match up to the view of the poet from the time, but don’t match up with our current perception of her — and certainly not the version who has appeared for three season’s on Dickinson.

“I like to say that, that episode is the world’s least exciting trip to the future, because the gazebo turns into a time machine and they wind up in the 1950s, where basically the Homestead is exactly what it was like before, except it’s dustier and nobody really cares,” Smith said. “And Emily thinks ‘oh wow, women get to go to college now this must be such an amazing time to be a woman.’ And sadly Sylvia informs them, ‘no, no, no, it’s very depressing, and I’ve tried to kill myself.’”

Plath continues to describe Emily, as Smith puts it, as “a shy, reclusive, virginal, spinster, who died of unrequited love for a man.” And while it’s clear Lavinia is initially as upset at this picture Plath paints as Emily, Baryshnikov was feeling the same way in real life. “I did genuinely feel protective of Hailee and Emily when [Plath] was saying she was morbidly depressed, she wanted to kill herself, she was the original sad girl.” Baryshnikov said. “I said, ‘No. We’ve been creating this vivacious character. That’s not who she is.’ That kind of dissonance between the Emily Dickinson that we’ve all come to know and this fiery character we’ve created was so interesting to play.”

But perhaps the most important revelation that comes out of the discussion with Plath that is not about Emily’s future, but her present. After Plath notes that she had a secret, unrequited love, Lavinia presses Emily for the name of the man in her life. Emily vehemently stresses that she’s “never been in love with a man,” to which Plath replies that Emily might be right, and a recent book (“The Riddle of Emily Dickinson,” by Rebecca Patterson) suggested that Emily may, in fact, have been a lesbian. But Lavinia and Emily have no idea what she’s talking about, and Lavinia replies confidently that she’s not a lesbian, she’s “an American.”

This semi-farcical exchange gets to the heart of nearly everything that is at the root of Emily’s romantic journey over three seasons: Emily doesn’t actually know the terminology of what, or who she is. She’s all about words, and description, that is part of the lifeblood that makes her a poet — but she still doesn’t know what to call herself. A lot of the research varies here, but while “lesbian” has been around as a word in various forms for centuries (and existed as a concept since the dawn of humanity), it wasn’t seen in a medical dictionary until 1890 — several years after Emily Dickinson died. Plath helpfully defines the word for them (“a woman who loved other women”), and Emily stands there, stunned, silent, finally understanding that she’s not just a lesbian, there’s not just a word for it… But there are other people like her.

“For Emily [this] is part of her larger journey in Season 3, which is really about coming out and owning her sexuality and being a bit bolder about defining herself and her love for Sue,” Smith continued. “And seizing the moment that is the present, because that’s all we have at the end of the day.”

This crests in an emotional confession from Emily to Lavinia, who asks her whether it’s true that she loves another woman. “It’s Sue,” Emily says. “It’s always been Sue. I love Sue.” To which Lavinia simply replies: “I think I knew that.”

“I was so pleased to see that that’s how that line was written, because that is how I’ve always felt about the character,” Baryshnikov said. “I think there is something about Emily that Lavinia has always intrinsically understood isn’t the same as everyone else, isn’t traditional.”

Perhaps confusingly, it turns out that the time travel has been part of a dream sequence, one of Emily’s frequent flights of fancy. But afterwards, Lavinia explains that in “real” life Emily complained to her about Sue, and then they had “a really nice talk.” The implication here is that while Sylvia Plath and the trip to the future might not have actually happened, Emily’s confession about Sue did — marking the first time she’s told someone about her relationship; other than Walt Whitman (Billy Eichner), who was also only in Emily’s imagination.

“One of our producers and directors, Silas Howard, was on set that day,” Baryshnikov recalled. “He texted Hailee and I at lunch and said, ‘I was really so moved by watching you guys shoot that. It just occurred to me that Emily hasn’t said on the show, ‘I love Sue,’ to anyone except Lavinia in this episode.’”

Emily’s revelation, and Lavinia’s urging to go and pursue Sue in the present, are unfortunately interrupted by the news that their friend Frazar Stearns (Will Pullen) has died. But as we head into the final three episodes of the series, it’s clear that Emily finally knows who she is — and what she wants. And that’s Sue.

Where to watch Dickinson

The Latest News on ‘Dickinson’: Inside Emily and Lavinia’s ‘Bill & Ted’ Inspired Trip Through Time

You may have missed